My mom died in 1999 from breast cancer. She was 38; I was 7. I went to Korea over the holidays and met with her brothers, their wives, and her father who told me many stories about what she was like. I wrote her a letter based on my time learning about her and visiting her remains for the first time.

It feels strange to address you directly because it's been over 17 years since you left and you've been absent for most of my life. Although I don't think of you as often as I used to, your absence is still keenly felt: Every time I visit Korea, I think about what my life would be like if you hadn't gotten sick and I had grown up with you; every Mother's Day, I wish I could call you and send you flowers and envy my friends who could do so; every time someone asks me why I grew up in the States, I recount how you became too sick to care of Jeremy, Esther, and me and sent us to California to live with Dad's parents.

I wish I remembered more about you from my childhood, and at this point it's hard to tell which memories are from direct experience and which are old photographs and family stories pretending to be my memories. I definitely remember thinking that you were the most beautiful person in the world when I was little. Maybe every kid believes that about their mom, but little me would have insisted that you were truly more beautiful than all the other moms. I also remember how little me had a particular fondness for hugging and kissing your feet, and you would tell me that you had stepped in poop earlier that day to make me stop, and I would tell you that I didn't care. Of course, there was that tragic morning when I woke up and hugged and kissed your feet only to realize that they were actually Jeremy's.

I had lunch with big Uncle and little Uncle and their families when I visited Seoul: 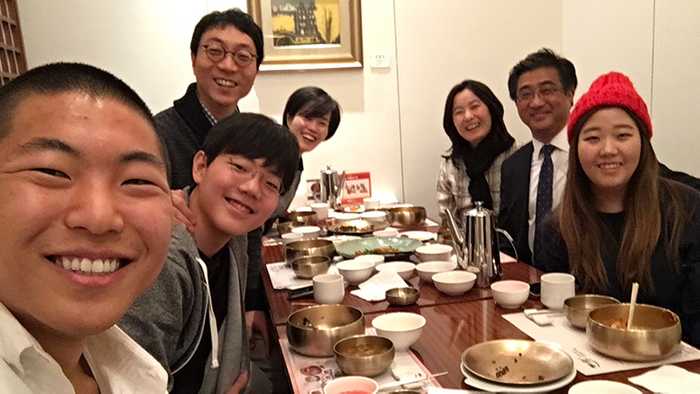 One of the things that Jeremy told me growing up was that in some ways, you could have been a better mother because you would do things like go to church and leave Jeremy, Esther, and me at home without making dinner so Jeremy would have to frequently order delivery for us. Over lunch, I asked your brothers and their wives whether this was true and they said that yes, this sounded exactly like something you would do. Big Uncle said that you would often leave us at home by ourselves while we were still sleeping to go to church for prayer service early in the morning. Apparently your thinking was that since you were going to church to serve God, God obviously wouldn't let anything bad happen to us while you were gone. Mom, I don't know who told you otherwise, but "let go and let God" is a terrible parenting strategy.

The recurring theme whenever I hear stories about you is that you were extremely devoted to Christianity and that everything else was secondary. I remember hearing that when you got sick, you sold your jewelry and donated the earnings to your church. While I think that money would have been better spent on funding your cancer treatment, I can respect the sincere commitment you had to your beliefs.

Perhaps as a result of your efforts to be like Christ, I heard many stories about how kind and selfless you were. You left our apartment door open and had some sort of free daycare situation where other families in the apartment building could drop off their kids and go about their day. You hit someone's parked car and left a note so kind that he wrote back to say that there was no way he could be upset about the accident given what you wrote.

Big Uncle also told me that you told Dad to remarry and move on so that Jeremy, Esther, and I could have a new mother. This was pretty illuminating to hear because there was a time when I was fairly upset that Dad remarried just a year after your passing. It felt like he had moved on too quickly and had betrayed you, but it's nice to hear that he had your blessing in finding someone new.

After Seoul, I went down to Busan and met up with Grandpa: 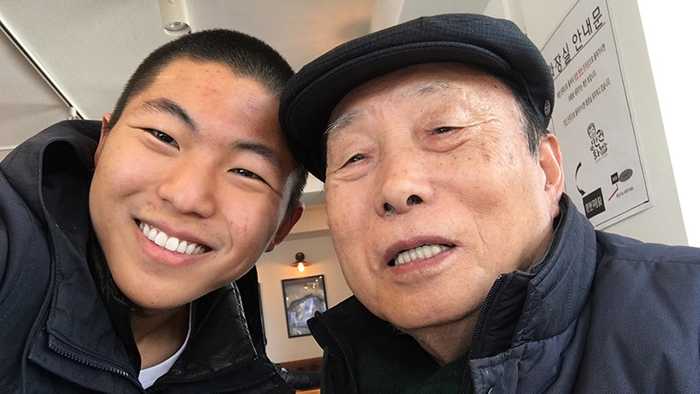 He told me about how you once asked him why he encouraged your brothers to study hard but not you. He told you that you would be fine since you had two younger brothers and that he would be happy regardless of whether you went to college or not. You took that as a challenge, studied hard, and got a scholarship to Pusan National University. I was really proud to hear that you were a total badass.

Grandpa told me how devoted of a wife you were and how you gave up your career as a middle school Chemistry teacher in order to move to Seoul to support Dad's career. I had no idea that you used to be a teacher and it was really neat to hear about your life before I was born.

During our conversation, Grandpa kept returning back to how he felt both sorry and thankful to Grandma (Dad's mom) for taking on the responsibility of raising Jeremy, Esther, and me and going through another round of motherhood after raising Dad and his brothers. You left us in great hands: Grandma and Grandpa (Dad's parents) did a wonderful job taking care of us, although in our younger days, Grandpa did threaten to deport us to Korea whenever we misbehaved.

When I had lunch with Uncles in Seoul, I had asked about your grave because I wanted to visit it. I didn't know about your death when your funeral happened (Dad thought it was more important me to focus on my 1st grade studies rather than attend your funeral so he hid your death for a while. Thanks, Dad), and I hadn't had the chance to visit your grave in the 17 years since. They told me that you had been cremated, and it seemed like they were trying to reassure me that it wasn't a bad option even though I never thought it was. Grandpa also gave off the same sentiment and made the point of telling me that you had specifically requested to be cremated. He said that the reason why you wanted to be cremated was because a traditional grave would have to be tended to at least once a year, requiring Dad, Jeremy, Esther, or me to come visit, and you didn't want to put that kind of burden on us. I was sad to hear that you thought it would be a burden and also that Dad had gone along with it, although I understand why.

I stayed with Dad's younger brother during my time in Busan, and he and his wife graciously offered to take me to your memorial the day after I saw Grandpa. I was pretty excited and nervous, and I didn't know how I would feel visiting your remains for the first time. I thought I would probably cry.

We arrived at the cemetery, and I saw fields lined up with gravestones. For some reason, even though I knew that you had been cremated, I thought I'd be walking along these graves to find yours. Instead, we went inside a building with rooms filled with lockers. We learned that your locker was number 20918 in room 12: 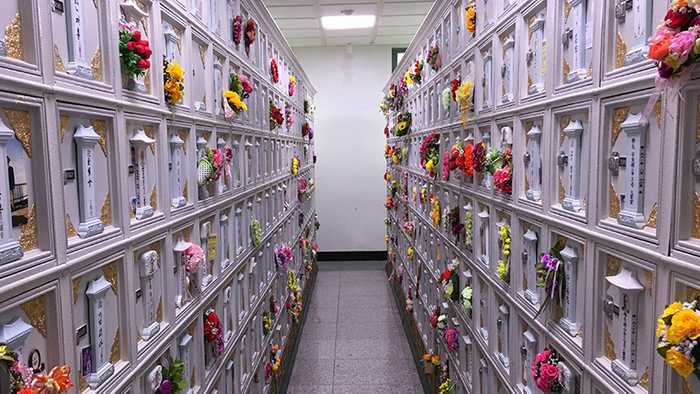 I was pretty taken aback by the setup and the process of finding your memorial. It felt like walking down the rows of bookshelves at a library looking for a particular book or finding a locker inside a gym. We finally found yours: 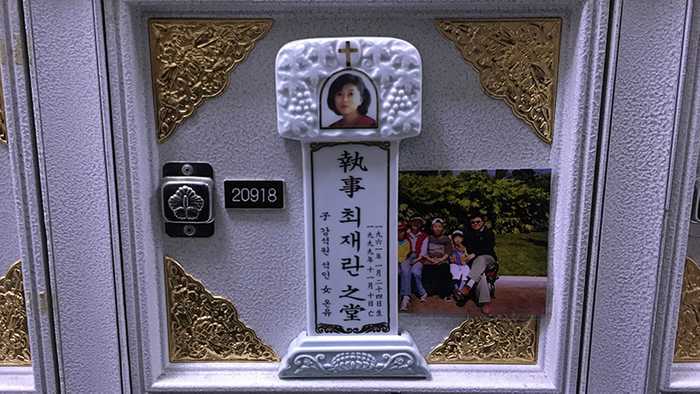 Dad had pinned a picture of our family: 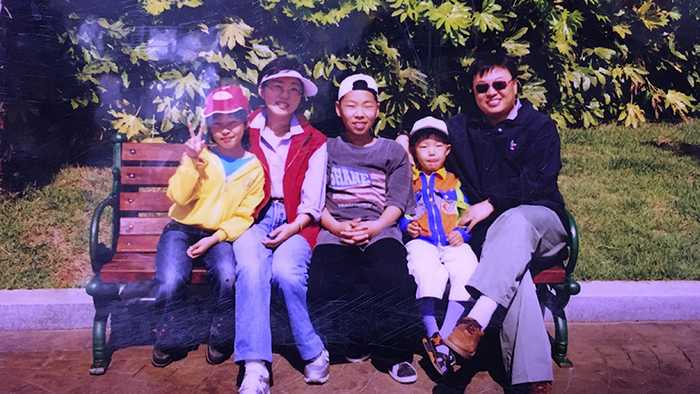 Uncle told me that inside the locker, there is an urn with your ashes. The crematorium allows families to use a locker for an initial period of 15 years with three possible renewals of 5 years each. When the time is right, I'm going to take your ashes home and Jeremy, Esther, and I will look after your remains. I promise it won't be a burden.

As I try not to turn into a bawling baby in this café thinking about you and writing this letter, I can only wish you were here to tell me more of your stories yourself. It must have been extremely difficult sending your children away, and I can only imagine how painful it must have been to slowly lose the fight against cancer and realize that you would not be able to see us grow up. Even through all that, you remained kind, loving, and selfless and I hope I'm growing up to be a man that you'd be proud of. Your ashes may be in some nondescript locker, but you will always be with me. I love you, Mom.

The Joys of Life in Japan